It was at Fornos de Algodres that Portugal received, with the support of Monkeybiz, the Slackline European Cup, where the best trickliners in Europe to fought for the cup.

For three days, European athletes cheered the Portuguese village, competing with their incredible tricks, in the individuals cup and, for the first time, in the national teams competition. All this in an amphitheater with a sight difficult to describe.

The small town of Fornos de Algodres, so close to Serra da Estrela, created the ideal conditions for this competition to be a success for the public and a great experience for the athletes and in that, it was extremely successful.

In this competition the first two heats served to rank the 8 best athletes for the final phase. Each athlete had two opportunities to perform and, in the end, the best score of each defined the finalists.

In the finals, once again with two heats, things tightened and each athlete gave everything to secure a place on the podium.

Nikolay’s creativity, Rui’s spins, Michael’s aggressiveness, and Alfred’s and Oscar’s will came into contention. However, who took the best, combining great maneuvers, always with the lightness that characterizes, was Valentin. 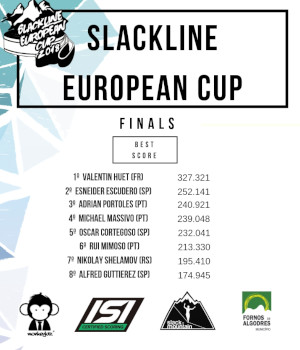 After him, Esneider, who with the greater amplitude of the competition, pulled some incredible doubles and long combos. Third place was a prize for consistency. After a long absence from injury, and then almost giving up the finals, making just the second heat, Adrian earned a well-deserved third place with Michael only a few tenths away.

In the teams competition we saw Portugal, Spain and Russia fighting for the title. In this model, each team was composed of 3 athletes and the representatives of each one were: Michael Massivo, Rui Mimoso and Flávio Silva (Portugal), Esneider Escudero, Oscar Cortegoso and Alfred Gutierrez (Spain), Nikolay Shelamov, Arthur Magel and Dimitry Shnyrik (Russia).

Each athlete had, in the qualifiers and finals, one minute per heat, and the team score resulted from the average score of the members of each team.